Loaning material to other institutions provides an exciting opportunity to bring our collections to new audiences around the country. Special collections curator Melissa Atkinson writes about a current loan, and describes some of the objects on view.

I was approached by Gill Clarke, Visiting Professor at the Otter Gallery, University of Chichester, with an exciting exhibition proposal about pacifist war artists. Our collections hold a wealth of material about pacifism, conflict and the Friends Ambulance Unit archive from the First and Second World Wars.

The exhibition, Conflicting Views: Pacifist Artists, aimed to explore the ways artists who were conscientious objectors and pacifists responded to conflicts through their art. It would mark the centenary of the ending of the First World War but expand beyond the early 20th century.

After many visits and discussions, I showed Gill a selection of material from which she chose specific artwork. A loan application was made 6 months in advance of the exhibition, requesting to borrow 11 items from our collections. We scrutinised the application, looking at security and environmental gallery conditions as well as examining the artworks for suitability. The artworks selected were in a diverse collection of formats, from a sculpture and large watercolour panel to small prints and a hardback book.

Gill went away to write the exhibitions catalogue and I started to focus on conditions reports for each item, examining any faults and potential issues for long-term display plus art valuations for insurance purposes.

Fine art movers Cadogan Tate came on the scheduled day in early June and expertly packed the art. The next time I saw our artwork was at the opening of the exhibition of Conflicting Views: Pacifist Artists. What a joy to see parts of our collection out of the Library and hanging in a gallery to be discovered by a new audience. 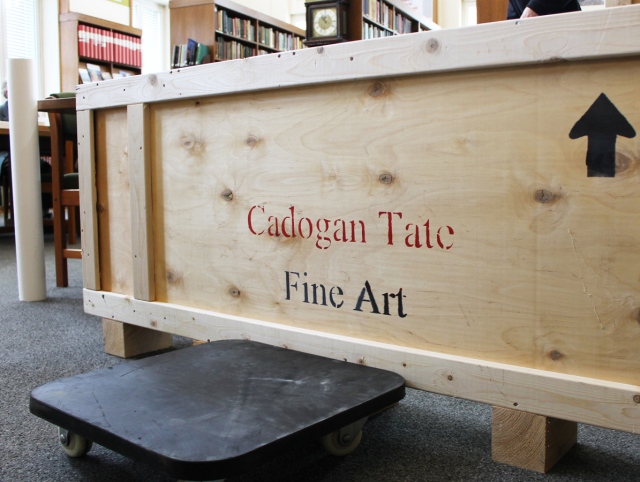 Ernest Procter (1886-1935) was one of many artists who volunteered with the FAU. He trained as an orderly but worked as an artist. He visited different SSA units in France and Belgium making sketches and drawings of his experiences. Section Sanitaire Anglaise was the name given to Red Cross, FAU & Order of St John ambulance units. We hold 80 artworks from this Quaker artist, consisting of drawings, sketches and watercolours, all from his time with the FAU from 1916 to 1919. 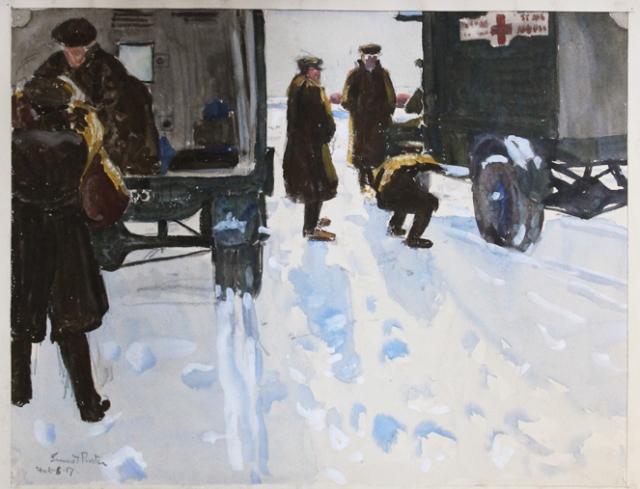 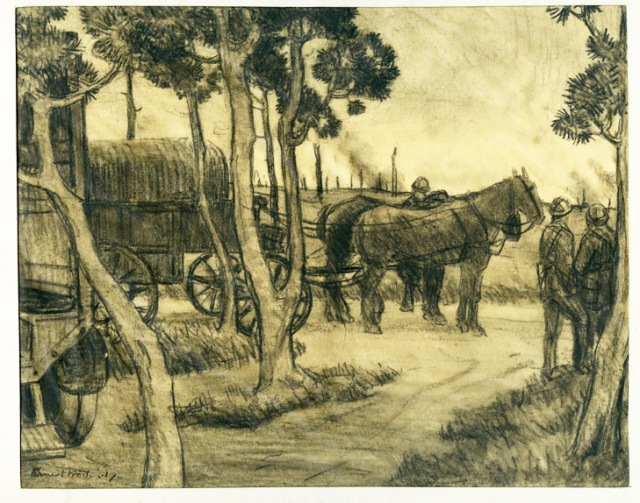 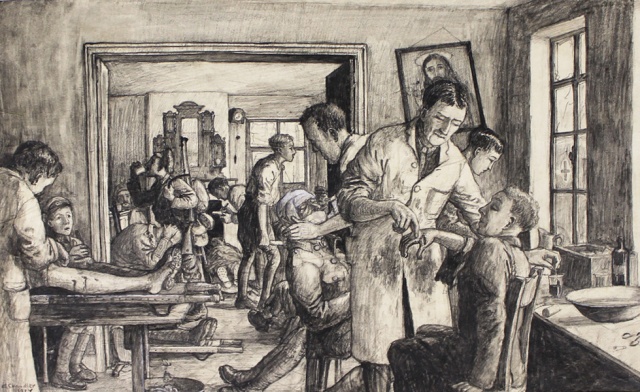 Four prints by George P. Micklewright (1893-1951) who drew satirical cartoons of being a conscientious objector in prison during WWI. Micklewright was an absolutist who refused to be involved in any aspect of the war. He was arrested, fined and imprisoned at Lichfield, then moved to Warwick, Wormwood Scrubs and Dartmoor prisons. Micklewright went on to be a successful book jacket illustrator for crime and science fiction books. 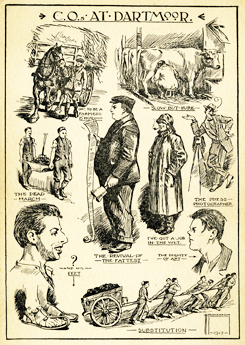 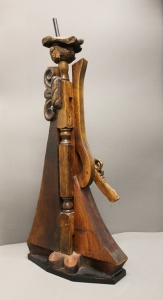 Sculpture entitled The Sentinel by Hugo Powell (1919-2014). Powell studied at Leighton Park, a Quaker school, and was a conscientious objector who volunteered with the FAU, travelling with the Hadfield Spears Field Hospital in North Africa and Europe in World War II. He was not a Quaker but was sympathetic to Quakerism. The sculpture was made in 1986 and is described as a wooden assemblage made from off-cuts from a boatyard and found objects in Powell’s studio that have been dowelled together.

‘Let others celebrate the solemnities of official memorials. Here is a private and affectionate remembrancer of the men of the First Free French Division and my years with them.’ Hugo Powell.

The Ghosts of the Slain by R. L. Outhwaite (1915), illustrated by Joseph Southall (1861-1944). Southall was a Quaker from Warwickshire Monthly Meeting and had a successful career as an artist and illustrator. As a socialist and pacifist, he also wrote about these topics. 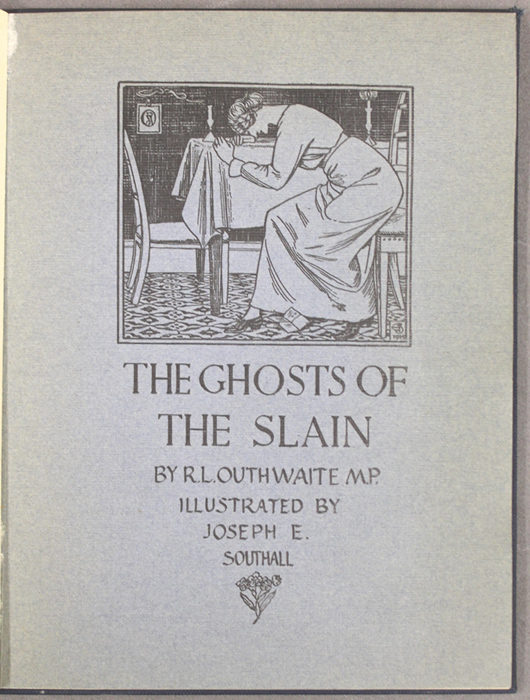 Title page by Joseph E Southall for Ghosts of the Slain, by R L Outhwaite (1915)

Conflicting Views: Pacifist Artists will be on until 7 October 2018 at the Otter Gallery, University of Chichester.

In response to your comments, here are the other items loaned to the Otter Gallery for the Conflicting Views exhibition this summer. 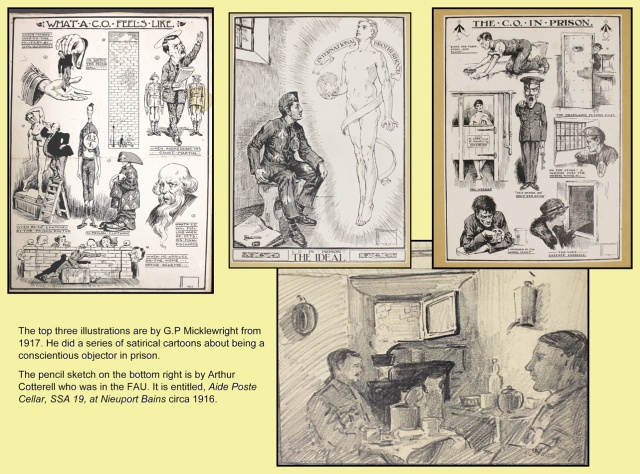