Open, healthy, scrupulously clean, with a liberal table: the Armfields and their temperance hotel

This year the Library was given a collection relating to the Armfield family who ran Armfield’s South Place Temperance Hotel near Finsbury Circus, London, during the second half of the 19th century.

The collection includes a visitors’ book chronicling guests from 1857 to 1869, a copy of Joseph John Armfield’s memoir, and personal family papers, as well as photographs and publicity material relating to the hotel.

Joseph Armfield (1821-1894), the head of this branch of the family, was a conservative Quaker who held to the principles of plain dress and plain speech. His religious views were described by his son Joseph John as “extreme”, “strict”, and “orthodox”. He was an active member of the Society of Friends, publishing two tracts and serving on numerous committees. He had taken the temperance pledge in 1839, at the age of 18, and his brother was an ardent temperance campaigner, so it is unsurprising that he chose to run a temperance hotel.

Temperance hotels, like coffee taverns and temperance clubs, were one of a range of institutions set up by temperance campaigners to provide access to social and entertainment amenities without the temptation of alcohol being present.

Advertisement for temperance drinks in The Friend

The ideal temperance hotel should offer respectable food and lodging, a place for people to socialise and conduct business and, of course, a variety of non-alcoholic beverages. Unfortunately, temperance hotels generally had rather a poor reputation – they were often conversions of existing buildings run by those with little or no prior experience in the trade and, deprived of the profits that could be made from the sale of alcohol, were unable to offer luxuries. Even temperance campaigners were forced to admit that they were generally “not attractive”.

Joseph had worked as a clerk for various family owned businesses before opening the hotel with his wife Julia (née Ashby, 1813-1889) in 1857. They converted the house of a wealthy Jewish silk merchant and moved in with their three surviving children: Julia Anne (1850-1902), later author of Quaker tracts and member of Fritchley General Meeting, Joseph John (1852-1935), engineer, and Aaron Ashby (1854-1944)at who was eventually to take over from his father.

Despite the inexperience of the Armfields, and the building’s origins as a domestic dwelling, Armfield’s South Place Hotel proved very successful. It was situated at the corner of South Place and South Street, just north of Finsbury Circus. As we can see from this flyer, it was initially a single five-storey house with basement. Joseph John describes high-ceilinged rooms, mahogany-framed sash windows, and thick mahogany doors with ivory-inlaid door furniture, and recalls sitting on the balconies outside the first floor windows.

The hotel was advertised in both The Friend and the British Friend.

Advertisement in The Friend (1857)

No doubt bolstered by its location less than a mile from Devonshire House, where Yearly Meeting was held, Armfield’s had many Quaker guests. Representatives from all the well-known British Quaker families can be seen in pages of the visitors’ book – Sturges, Clarks, Pumphrys, Peases, Corders, Foxes, Bevans, Cadburys, Lloyds and Rowntrees, among others. There were also numerous American Quaker visitors, including members of the Bettle and Turnbull families and James E. Rhoads – president of Bryn Mawr College.

Joseph John recalls in his memoir that he and his siblings were sent away during Yearly Meeting each year. “Our hotel was conveniently near [Devonshire House] & Friends to the full capacity of its accommodation stayed there during that time; & it was a relief no doubt to our parents to get us young children out of the way during that period… I expect our room in London was more acceptable than our company”.

It was not only Quakers who stayed at Armfield’s. Other figures engaged in social and public work chose the hotel, including abolitionist Harriet Beecher Stowe, temperance campaigner Asbjorn Kloster and missionary Elias Schrenk. Ten men from temperance-led life insurance company Sceptre Life Association are noted in the guest book as expressing “their entire satisfaction with the attention received and the accommodation afforded”. As a budding engineer, Joseph John enthusiastically recalls dining with sea captains and the inventor of the screw propeller.

In the early 1870s it was decided that Aaron Ashby (Ashby to his family) would become his father’s apprentice, partner, and then successor at the hotel. In 1873 Julia Armfield was in ill health, so she and Joseph moved out of the hotel to Croydon, leaving Ashby living in the hotel. Ashby held less strict religious views than his father, and over the next 30 years the hotel’s character gradually changed. 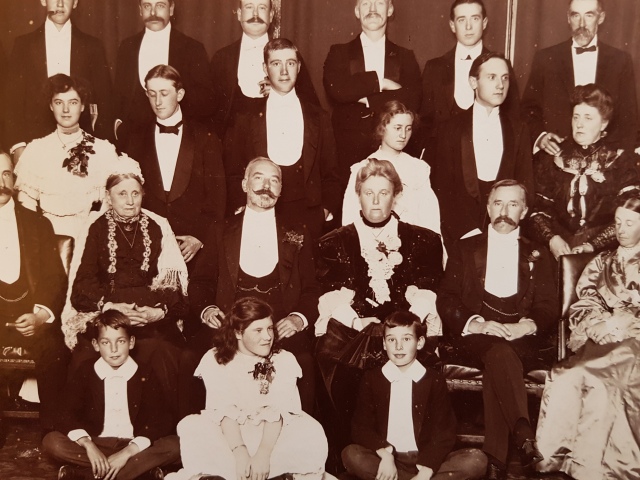 Armfields group photograph, with Ashby and Helen in the centre

The hotel was advertised in the British Friend as having been enlarged and redecorated. Joseph John mentions that the hotel eventually grew to encompass five houses going down South Street and an additional building on South Place. At this point it had 70 bedrooms, coffee, commercial and private sitting rooms, a ladies drawing room and smoking and billiard rooms furnished by well-known billiard table manufacturers Burroughs and Watts.

Advertisement in the British Friend (1886)

In 1891, the hotel was completely rebuilt and accommodation doubled. Publicity photographs and a brochure in our archive give a good idea of what the rebuilt hotel would have been like.

The exterior is markedly different from the converted house and the rooms are comfortably decorated with art and fine furniture. The hotel boasts modern facilities – the telephone room (visible in the back of the entrance hall), a lift, electric lights, modern sanitary arrangements and hot and cold water on all floors. The hotel also now includes a separate restaurant available to rent for parties. Whereas the advertisements of earlier decades emphasised cleanliness and health, those of the 1880s and 1890s stress comfort and modernity.

Advertisement in the British Friend (1894)

There is no guestbook for this period, but we were able to find out a few of the hotel patrons from other sources. In 1895 King Khama of the Bamangwato people of Bechuanaland (now Botswana) stayed at the hotel whilst in London. Opposite Armfield’s was the South Place Chapel, home of the South Place Ethical Society (now called Conway Hall Ethical Society). Its periodical, The Ethical Record advertised a Sunday school and dances held in Armfield’s (thanks to staff at Conway Hall library for finding further links between the Ethical Society and the Armfields out at Croydon).

The Armfield family stopped being associated with the hotel at some point in the 1910s. It is thought by the family that the building was requisitioned by the government during World War One. We can see from this postcard that it was still operating in 1916.

An auction of the hotel’s contents was advertised in the Pall Mall Gazette (12 January 1918), marking the end of the story of Armfield’s South Place Hotel. The building itself was destroyed during the blitz, so although there is still a South Place Hotel on the site today, it bears no relation to the original Armfield’s.

The newly catalogued Armfield Papers provide a fascinating record of one Quaker family and their flourishing temperance enterprise in the latter part of 19th century.

Like Loading...
This entry was posted in New accessions and tagged architecture, Armfield family, temperance. Bookmark the permalink.

3 Responses to Open, healthy, scrupulously clean, with a liberal table: the Armfields and their temperance hotel