30 July 2018 is the 300th anniversary of the death of William Penn. He is widely-known as the founder of the American colony of Pennsylvania in 1681, on land given to him by Charles II in payment of a debt the crown owed to his family. Penn is a notable figure for Quakers, as one of those who were closely associated with George Fox in the earliest days of the faith: he is represented in two panels in the Quaker Tapestry and there is a meeting room at Friends House named after him. He has a complex legacy, however, which continues to be considered and reassessed today.

A quick overview of the Library’s collections relating to him gives a sense of the way in which he has continued to be referred to and commemorated throughout the last 300 years.

There are extensive collections of published works in the Library relating to William Penn. He wrote numerous books and pamphlets, and has been much written about, both during his life and in the 300 years since his death. In addition to the published works, the Library holds a range of unique material, including both archival documents and objects associated with Penn (often referred to in the past as “curios”).

The Library collections have been used to commemorate William Penn on various occasions. In 1911, there was an exhibition in the Library to mark the unveiling of a memorial tablet at the church where he was baptised, All Hallows-by-the-Tower in the City of London. We also have a commemorative medal from that event. Another exhibition was mounted in Friends House in 1944, to mark the 300th anniversary of his birth. 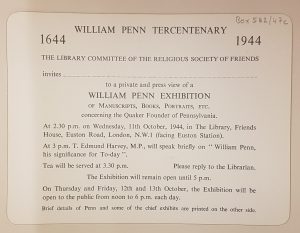 The archival material in the Library relating to William Penn includes property deeds relating to land in Pennsylvania, such as the one pictured below. There are also letters from William Penn amongst other people’s papers. One notable example, dated 13th of 11th month 1690 (13 January 1691, in the modern calendar), is a letter from him to Margaret Fox, formerly Margaret Fell, telling her of the death of her husband, George Fox. This letter is in the Thirnbeck Manuscripts, a collection of papers which came to the Library from a descendant of Margaret Fell. There is a copy of it elsewhere in the archives, made at a later date by an unknown author.

A small collection of papers known as the Penn Manuscripts was donated to the Society of Friends in 1892. The contents of the collection are not yet searchable through our catalogue, but there are handwritten lists of the documents dating from around the time when they came to the Library. The Penn Manuscripts include papers relating to William Penn’s life and work, and that of his family after his death, including documents relating to the establishment of Pennsylvania.

Many of the Penn objects in the Library’s collections refer to or commemorate a particular event in the establishment of Pennsylvania, a treaty Penn is thought to have agreed with the Native Americans in the area in 1683.

There is limited evidence of the treaty itself and it is primarily documented in a painting by Benjamin West, a painter who was born in Pennsylvania but later moved to Britain and became a President of the Royal Academy. The painting, now at the Pennsylvania Academy of Fine Arts in Philadelphia, was made in the 1770s and there are many versions of it in existence, including prints.

Our former Librarian, Norman Penney, wrote an article in The Friend in 1902 about the Library’s collections, which included two pieces of wood said to be from the elm tree under which William Penn agreed the treaty. They are still in the Library, and are awaiting further research into their provenance, as well as assessment by a conservator. 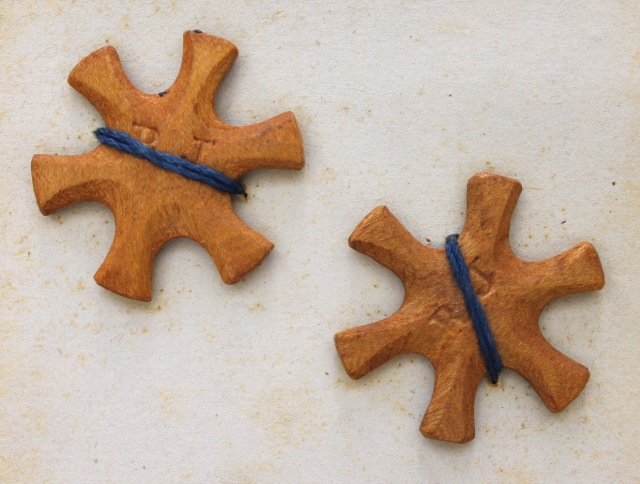 Silk winders, said to be made from wood of the “Treaty Tree”

We have further instances of wooden objects allegedly made from the same elm tree, including two small silk winders (pictured above). There is also a small framed engraving of the image of the treaty being signed: a label on the back states that the frame is made of wood from the elm tree. Much of this unique material is un-catalogued and in need of conservation. It can only be viewed by prior arrangement. 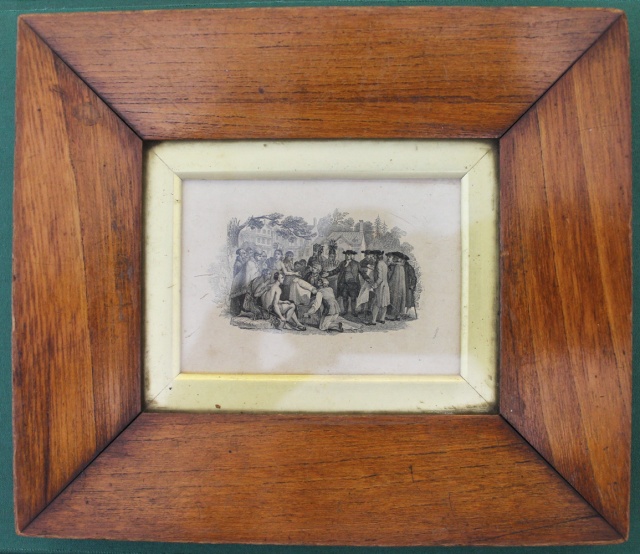 Engraving of Penn’s Treaty with the Indians by Benjamin West, in a frame said to be from the “Treaty Tree” (Library reference: Temp MSS 89/4)

Moving away from wooden objects, we have further representations of Penn’s treaty woven in silk and appearing on a set of china. From the information we currently have about the woven image, it dates from the late 18th or early 19th century. The china is of unknown date and provenance, but provides a further indication of the extent to which Penn, and this particular aspect of his life and legacy has continued to be commemorated since his death.

Some of these unique objects will be on display in the reading room later this summer, to mark the tercentenary. We’ve also produced a new subject guide on William Penn, now a featured resource available for download from our website.

Like Loading...
This entry was posted in Highlights and tagged anniversaries, exhibitions, manuscripts, objects, William Penn. Bookmark the permalink.