We hope you enjoyed our blog post back in October exploring some of the many works of fiction in our collections. Returning to the theme, we’d like to focus this time on drama. You might not necessarily think of theatre when you think of our collections at Friends House Library. Our collections do, however, include fascinating items that reflect the changing attitudes of the Society of Friends to the dramatic arts from the 17th century to the present.

During the early days of Quakerism theatres were closed, having been banned at the start of the civil war in 1642. Although some were reopened in 1660, many religious groups were still hostile to drama. It wasn’t just the content of the plays they objected to but the whole experience of going to a playhouse. Early Friends too criticised the nature of plays and playhouses. Influential members of the Society, including William Penn in No Cross, No Crown (1682) and Robert Barclay in his An Apology for the True Christian Divinity (1678), wrote against them.

As well as these texts, our collections include other examples of pamphlets and addresses written by Friends urging people not to frequent theatres.

An Address to the Citizens of Bristol (1739)

John Field even wrote to Queen Anne herself on the subject in 1703:

Officially too, the Society of Friends warned against the dangers of play-going. As the earliest printed Book of Discipline from 1783 warned against the reading of novels, so it also urged Friends to “avoid sports, plays, and all such diversions, as tending to alienate the mind from God, and to deprive the soul of his comfortable presence and power”.

In 1788 a letter was issued by Meeting for Sufferings regarding a recent act that had been passed allowing justices to grant licenses for stage entertainments. Three weeks’ notice was required; this, the letter explained, “may give such friends as reside in the jurisdiction time to interfere”. 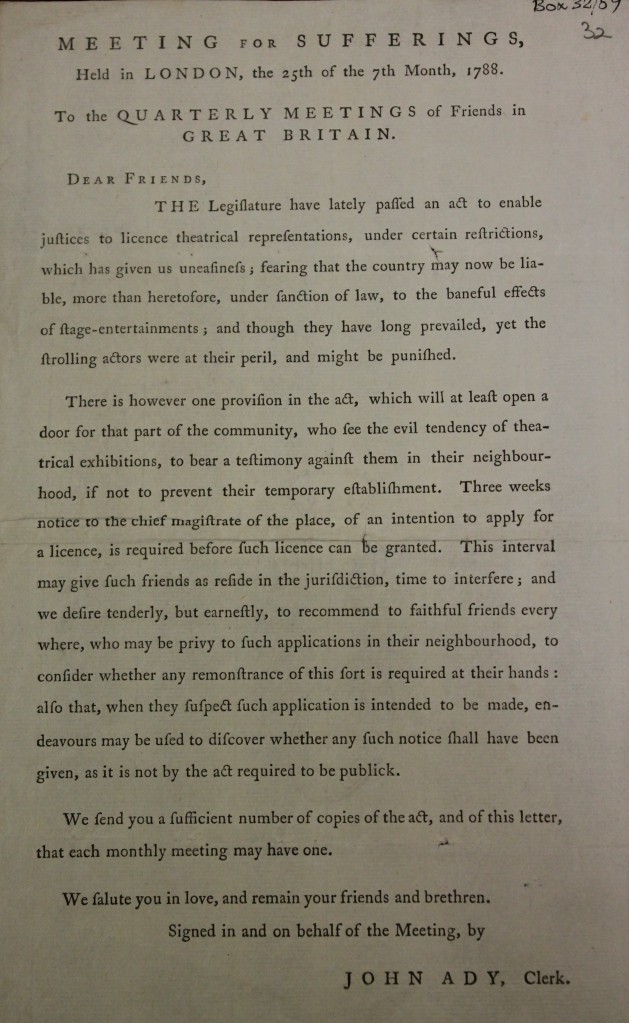 Turning to the dramas themselves, our collections generally fall into two categories: works written by Quakers and works that feature Quaker characters. Not surprisingly given Quaker feelings towards theatre at the time, our earliest material falls into the latter category and not all the depictions are entirely flattering. Ezra Kempton Maxfield, writing on Quaker appearances in English stage plays in the late 17th and 18th centuries, observed that “the attitude of playwrights toward Quakers varies all the way from the simply humorous to the downright malicious”.

According to Kempton Maxfield, the first reference to the Quakers in a play was in The Country Innocence, or the Chambermaid turned Quaker by John Leanerd, published in 1677.

In 1921, in an article about the Library, when it was still situated in Devonshire House, the Society of Friends’ former headquarters, Anna L. Littleboy noted of its contents:

The anti-Quaker literature is large in bulk and very curious and interesting. It is not all serious argument or even invective. Sometimes it takes the form of poetry…and there are quite a number of satirical plays, which would make an  interesting study, such as The Country Innocence (1677), The Fair Quaker of Deal (1710), The Quaker’s Opera (1728), and others, most of which are scrupulously catalogued as “Adverse”.

Misgivings about theatre continued well into the late 19th century, as demonstrated by a series of articles called ‘Quakerism and Recreation’ in the Friends Quarterly Examiner in 1882. But opinions were beginning to soften. Philip Thompson, author of the first of the articles, argued that, “there is assuredly nothing immoral, or opposed to religion, essential to drama in the abstract. And whatever room for improvement there may be, I venture to think that the stage as a whole does not deserve the stigma that has been fastened on it by a large proportion of religious people.”

We even see Friends venturing into writing plays. Arthur E. Tregelles (1835-1911), for example, produced several historical dramas published in the last decade of the 19th century.

These trends continued and developed in the twentieth century. As the reputation of the playhouses themselves improved, so Friends saw the medium as a way to explore their values. For example we have a number of plays exploring peace and pacifism: 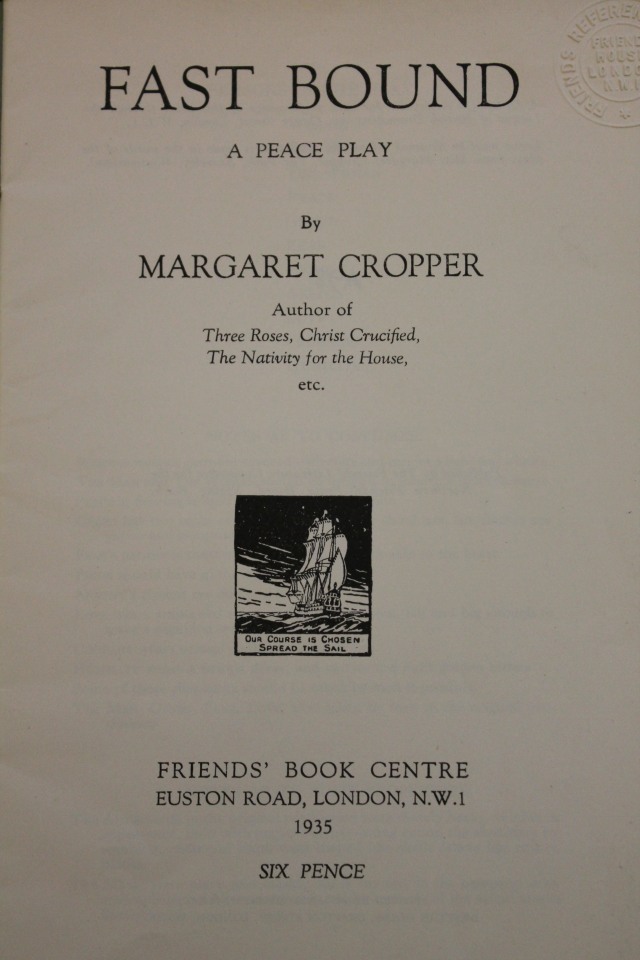 A sure sign of an acceptance of drama was its use in Quaker schools as demonstrated by this script from Ackworth School in 1910, performed to celebrate the history of the school. 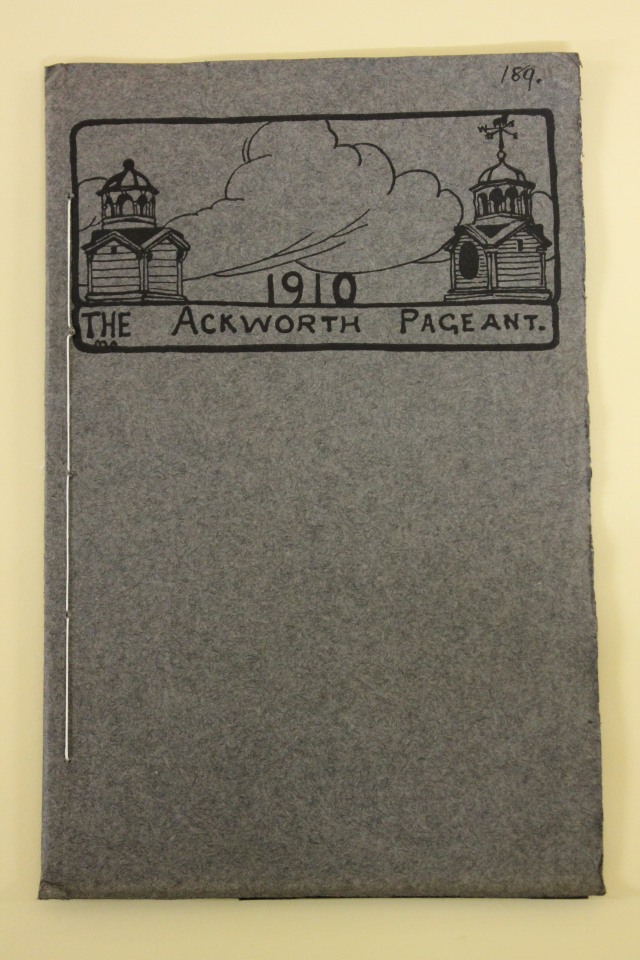 The 1925 edition of Christian Practice included a full page on Drama which explained:

The dramatic faculty, which is latent in every child and is strongly marked in gifted persons, is one which, with due discrimination and under appropriate conditions, may rightly be developed, and the dramatic art is one by which performers and spectators alike may gain a truer insight into human life, a deeper appreciation of its meaning, and wider sympathy with mankind. Friends have refrained in previous generations from supporting the theatre, and even from encouraging the amateur performance of plays, having been led to take this attitude because of the undesirable associations of the stage, the doubtful characters of many plays, and the dangers connected with the actors’ profession. The position has however been considerably altered by the endeavours of the profession itself, and many of its supporters, to make the drama a more healthy and valuable factor in social life. In some respects the old objections still hold good. Undesirable plays are numerous. Yet the drama is also being used for the representation of aspects of life, gay and serious, in such a way as to make it a healthful means both of entertainment and of education. Friends who go to see plays should feel it laid upon them to make a careful choice and to support the good.

Friends continued to feature as characters in plays as well and we have works by some well-known dramatists. Both of the examples below feature George Fox as a character. 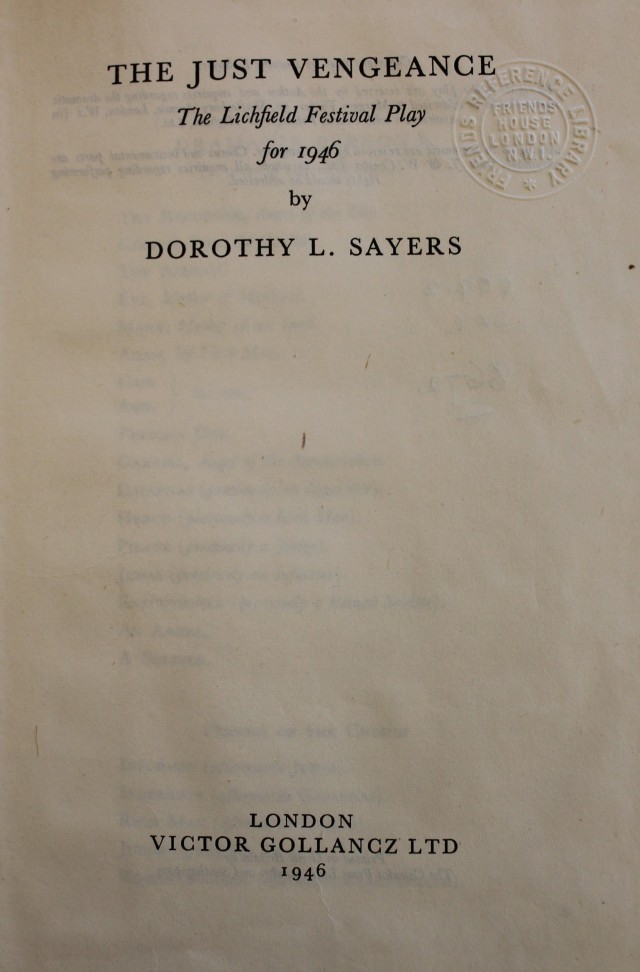 This has necessarily been a very brief overview of the Library’s drama collections. If you’d like to carry on exploring you can use our online catalogue to search for plays and publications on the subject of theatre-going. Use the “Expert search” screen to search for publication type = plays, or subject = theatre, narrow your results to a particular period, or combine with other search terms. And for some handy hints on using the catalogue, check out our catalogue search tips here.

Like Loading...
This entry was posted in Highlights and tagged drama, literature, recreation, theatre. Bookmark the permalink.

2 Responses to Theatre: some collection highlights