New images on display in the reading room: a quick tour

The Library reading room has had a make-over. Around the walls you’ll see a series of large panels displaying images selected from different parts of the collections. They give some insight into the breadth of material held by the Library, documenting over three and a half centuries of Quakerism and Quaker lives. The selection draws particularly on the visual items – posters, photographs, art work and artefacts – to be found in our collections. Each panel has its own story, and, as we found at Yearly Meeting, that story can open up conversations. For those who haven’t yet seen them, here’s a quick tour. 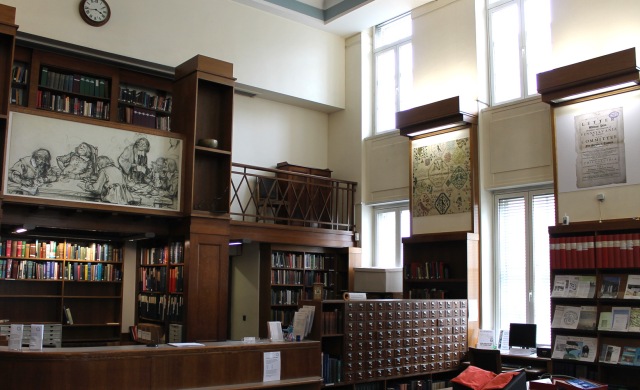 The large drawing facing into the reading room from the gallery may be an unexpected image. Who are the caricatured men grouped around the table, some bowed over their papers, deep in consultation, or leaning back, plump and confident? They are in fact characters depicted by artist Robert Spence (1871-1964) in a preparatory sketch for part of his etching Lancaster Assizes: George Fox refusing to take the oath (Robert Spence Collection SE 48).  Inspired by the 1664 journal entry, Spence’s completed etching has George Fox standing defiantly in the court room with his hat firmly on his head, refusing to swear, while the learned lawyers sit sprawled below. This was one of a marvellous series of etchings by Spence depicting scenes from Fox’s Journal. The Library’s Robert Spence Collection includes 99 prints and 82 sketches created between 1892 and 1954. 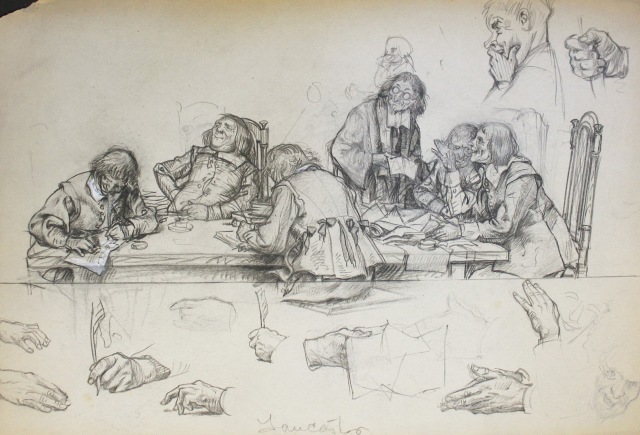 At the other end of the room are two images representing twentieth century Quaker work. The photograph of a Quaker relief worker with a mother and baby was taken by Campbell Hays for Friends Service Council in Nuseirat, Gaza Strip, at the time of the 1948 Arab Israeli War. It comes from the photographic archives of Friends Service Council, predecessor of Quaker Peace & Social Witness, which document some of the overseas and domestic work undertaken by Quakers aiding victims of conflict.

The other image is one of the Library’s historic peace posters. The Quaker peace testimony leads Quakers to witness against all war and violence. Quakers have been at the forefront of promoting non-violent conflict resolution and mediation. 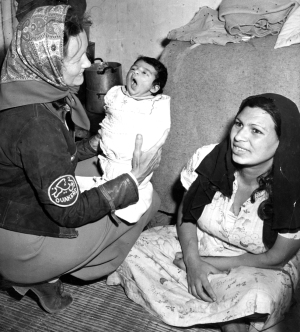 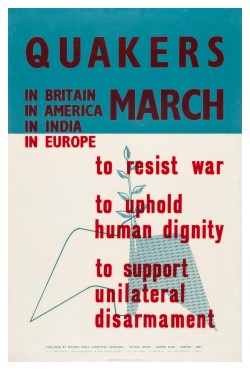 On the east wall of the reading room, looking out to Friends House garden, are four more panels. The Medallion Sampler made by Rachel Barritt in 1791 is one of 11 samplers in our textile collections. Around the central octagon containing a pair of birds with branches are flower buds, squirrels and several smaller detached motifs and initials (probably of fellow pupils or family). It is a distinctive pattern, typical of samplers embroidered by pupils at Ackworth, the Quaker school near Pontefact, West Yorkshire. Ackworth, founded 1779, was one of a number of “committee schools” was set up to provide a Quaker education for girls and boys. The Library holds useful source material on Quaker schools, including reports, school magazines, and list of pupils (and there’s a subject guide to help researchers on our webpages). 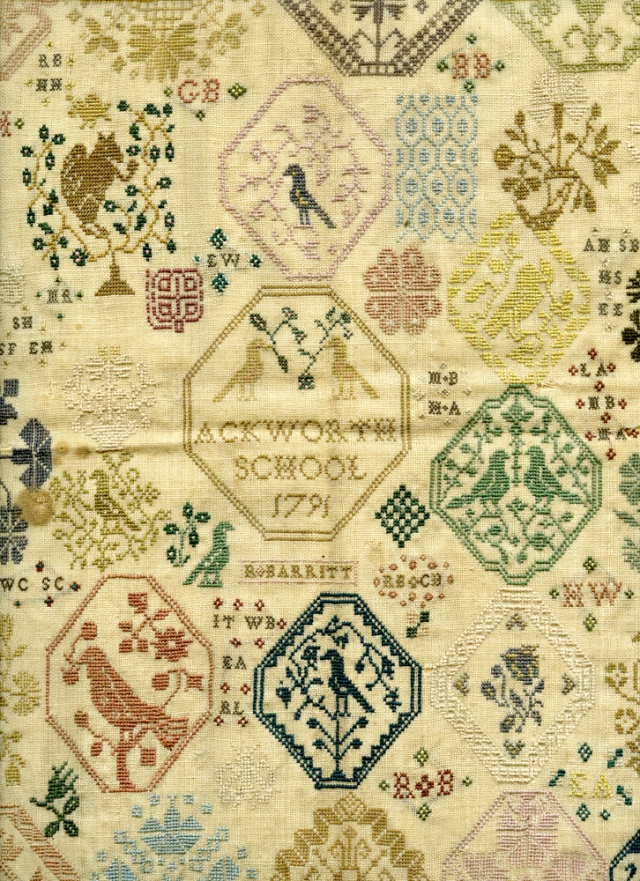 A Letter from William Penn proprietary and governour of Pennsylvania in America, to the Committee of the Free Society of Traders of that province, residing in London, was a pamphlet issued by William Penn (1644-1718) in 1683. It includes the first printed map of Philadelphia, the “city of brotherly love” planned by Penn as the capital of Pennsylvania, the proprietorial territory granted to him by King Charles II to satisfy a debt owed to his father. Penn’s letter promoting the territory to prospective settlers and investors describes the virtues of its natural resources and climate. From the early days of Quakerism, Friends travelled to America, whether emigrating in search of religious toleration, visiting meetings to preach and provide spiritual leadership (“travelling in the ministry”), or for commerce. 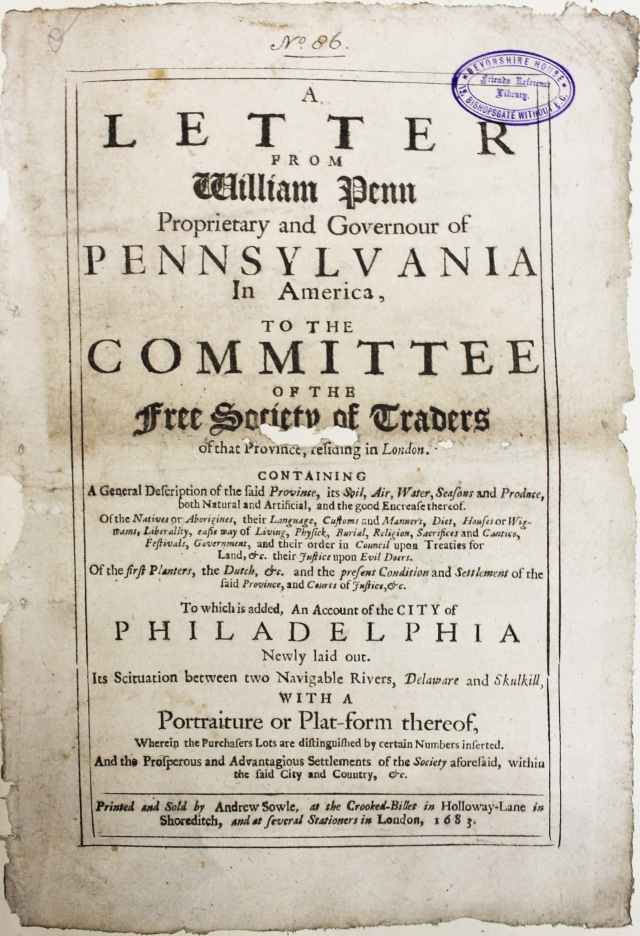 A letter from William Penn proprietary and governour of Pennsylvania in America. 1683 (Library reference Vol. C/86)

Alongside this is another poster, this time from the Friends Temperance Union and Friends Temperance and Moral Welfare Union archive. The archive consists of minutes, correspondence, reports, printed papers, lantern slides and posters. The posters and lantern slides, digitised as part of a project funded by the Wellcome Trust, were produced by Friends temperance campaigners to educate people about the health risks of alcohol and encourage the pursuit of interest and hobbies outside the public house. 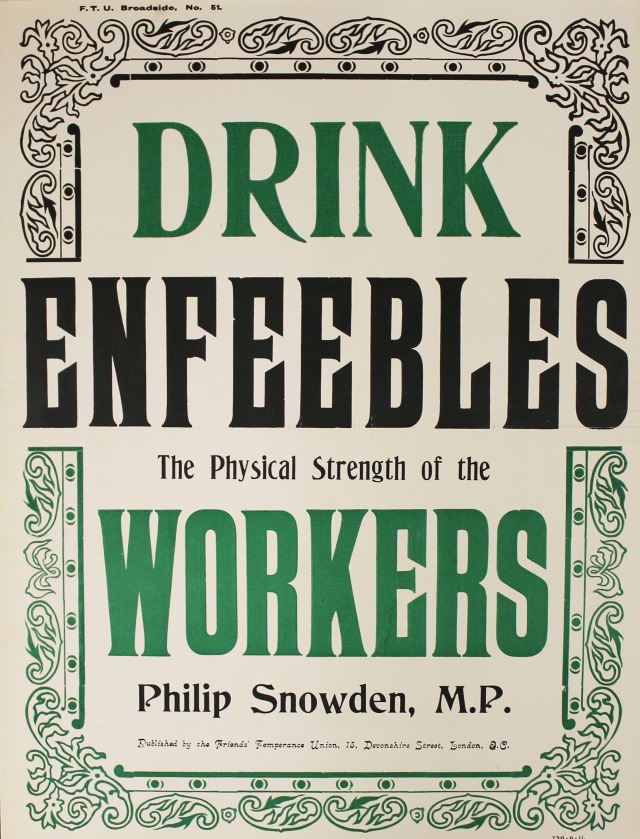 Last, but not least, is an illustration from The Works of John Fothergill, M.D., member of the Royal College of Physicians…with some account of his life by John Coakley Lettsom (1784). Fothergill was a distinguished Quaker physician and botanist, and a Fellow of the Royal Society. He had a wide circle of friends on both sides of the Atlantic, acted as patron to plant collector John Bartram, and provided support and funds for various projects, including the publication of Anthony Purver’s new translation of the Bible and the foundation of Ackworth School. The plate shows a botanical drawing of Arbutus andrachne, or Greek strawberry tree, reported as first flowering in England in Fothergill’s botanical garden at Upton House. 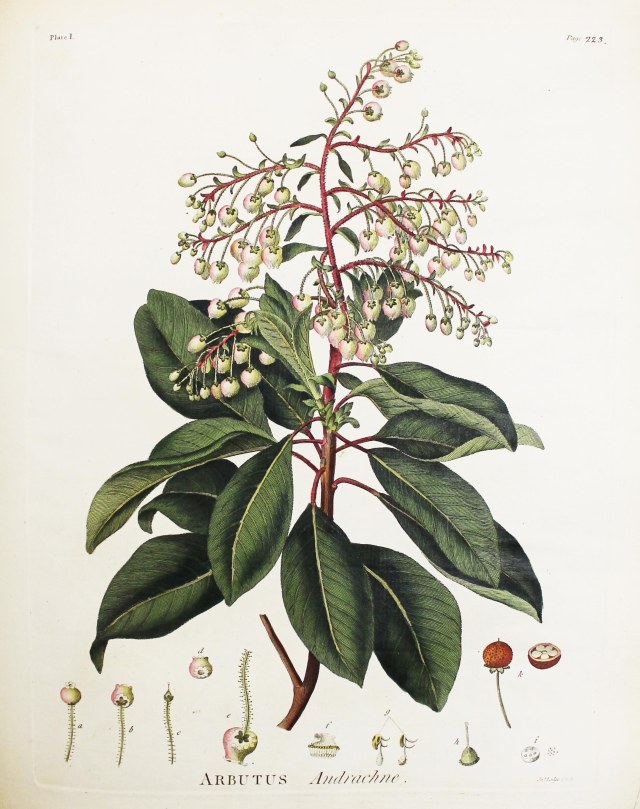 We welcome feedback on the new images and any other aspects of the Library service – please email library@quaker.org.uk.

Like Loading...
This entry was posted in Highlights and tagged illustrations, posters, visual resources. Bookmark the permalink.

3 Responses to New images on display in the reading room: a quick tour