Every archive is faced with the problem of growing backlogs of material waiting to be added to their online catalogues and made accessible for users. It is a skilled and time consuming task to update old catalogue entries in paper format to digital ones with modern standards. We were lucky enough to be able to secure funding for a project to update catalogue entries for a large backlog of manuscript collections and add to our online catalogue.

Over the course of 15 months, our project cataloguer Jane Kirby, created top level catalogue entries for around 600 collections. This has opened up these collections to a wider public and we started noticing the impact straight away in the reading room – with collections being ordered up that had rarely been looked at by readers – and even some new discoveries for staff!

The project faced various hurdles: often older collections had scant accession paperwork and needed extra research into their provenance. Some of these mysteries remain unsolved….Other collections needed extensive repacking and cleaning, or had to be earmarked for professional conservation work. We chose to focus on top level entries only, with a basic overview of each collection, as we wanted to get as much of the backlog onto the online catalogue as possible. For larger collections we will need to do further work on expanding their catalogues so that people can find the records they need.

There are all sorts of collections within the manuscripts, including collections from organisations that were not centrally managed by the Yearly Meeting, but that are closely linked with Quakers, such as Friends Ambulance Unit, Friends Temperance Union, and Central Board of Conscientious Objectors.

There are also collections of personal papers of notable Quakers, many of whom carried out work under the auspices of the central organisation, or were closely linked with the Society and wished to leave their papers to the Library. These papers give a complementary personal insight and emotional resonance to the official archives, which tell the story of Quaker work often from a purely administrative perspective.

We have highlighted three interesting collections of personal papers that show the personalities of the people behind the political and social movements and issues interesting Friends in the 20th century.

Lucy Backhouse was an active Friend who sat on many committees, including Friends Service Council, Friends Committee for Refugees and Aliens, Armenia Committee as well as Meeting for Sufferings. Her obituary in The Friend, the weekly Quaker magazine, highlights that one of her strengths was her extensive letter writing to support Friends carrying out missionary and relief work abroad. It was remarked that her address at 50 Higher Drive, Purley, must have been well known all over the world!

We have several collections of her papers in the Library including at TEMP MSS 511 and TEMP MSS 673.

Featured is an example from her papers of her support for Daniel and Emily Oliver who went to Brummana, Syria (later part of Lebanon) in 1895 to run the Friends Mission School there. During the First World War, after the Turkish invasion, they witnessed the orphan crisis there and set up an orphanage, pictured here in 1936, in a photo sent to Lucy Backhouse.

Reverse of photo: “With good wishes and greetings from the orphans & staff at Ras-el-Metn, Nov 2 1936”

Aline Atherton-Smith has an interesting collection of papers TEMP MSS 776 mainly about the Land Settlement movement of the 1920s, which she pioneered in Austria, earning her the title ‘Mother of the Settlements’.

She worked in Austria as Head of the Land Settlement Department of the Friends International Centre in Vienna, after the First World War, attempting to ease the poverty and housing issues there. Many Viennese citizens had fled the city for the surrounding areas and set up makeshift homes there. The settlement movement sought to instil co-operative organisation into these settlements and foster good community relations.

Atherton-Smith would seek to export this model to try to solve poverty and housing issues in England and elsewhere in the world. The letters in her collection show great warmth and gratitude from the Settlers towards Atherton-Smith, and a report from the FIC reads: “Her promotion of interpolitical co-operation had been of tremendous value to the movement.” It was also work that would bring her under the watch of the Nazis in the next decade. Her collection includes photographs of the building of the settlements in Austria, as well as correspondence about the movement. 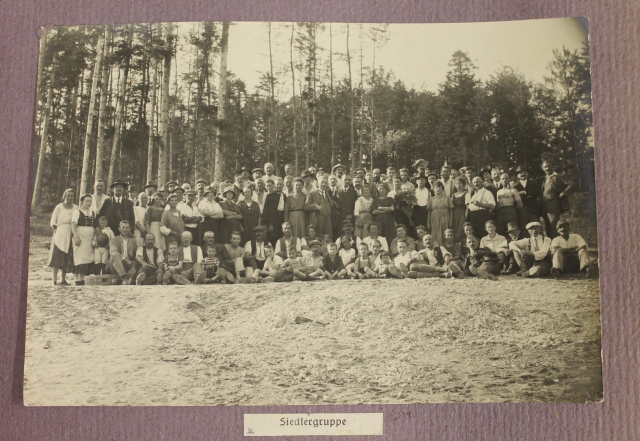 Mauricle Hussey’s papers TEMP MSS 544 are a colourful collection of drawings and sketches as well as family photographs and photos of farflung places. Hussey was an artist and one of her lively sketches is featured below. She was active on committees including Meeting for Sufferings and Friends Service Council, and seems to have travelled widely, writing articles on her travels in Russia, where in the 1950s she was one of the first British women to travel to Irkutsk. Below are some negatives of photos in Russia.