Quaker Strongrooms blog at the turning of the year 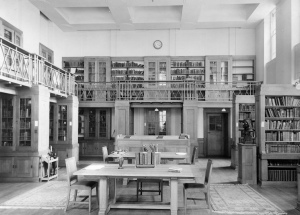 It’s time to look back over the past 12 months on the Quaker Strongrooms blog and ahead to what 2015 may bring. Our posts were unusually focused on one topic over much of the year, reflecting the importance of marking the World War I centenary from a non-militaristic point of view – so if that’s not your interest, thanks for sticking with us and look out for changes ahead!

2014 started with a personal response to the records of the India Conciliation Group by our reader Sue Smith of Oxford Quaker Meeting, followed by a look at some unusual (for us) volumes of papers on equine veterinary medicine by Bracy Clark. While we weren’t surprised that other researchers made forays into the ICG papers this year, the appearance of a new novel about the reforming veterinarian Bracy Clark later in the year was an unexpected coincidence. 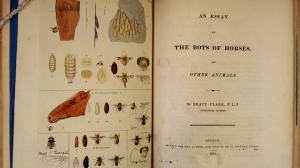 For the rest of the year the blog concentrated exclusively on World War I topics, highlighting some of the resources held by the Library, to support Quaker meetings and others marking the centenary over the coming years. We’ve already seen the fruits of some of this research in a host of events, exhibitions, publications from meetings and individuals around the country, not to mention the White Feather Diaries project.

We kicked off our World War I series with a blog post on Friends Peace Committee (predecessor of our present day Quaker Peace & Social Witness), actively promoting peace and international conciliation since the late 1880s. That was followed by Experiences of conscientious objectors, highlighting some of the unpublished resources held by the Library – prison diaries, letters and The Winchester Whisperer, a clandestine C.O. prison newspaper.

The longest blog post this year was a whistle-stop tour of resources on the Friends Ambulance Unit, including contemporary publications, archives and members’ diaries – a useful introduction to the work of a Quaker effort already becoming the focus of so many centenary projects. It’s great to be able to announce that the FAU personnel record cards have now been digitised and will very shortly be available to search online [now available online at http://fau.quaker.org.uk]. And since the FAU blog post appeared, the records of FAU Motor Stores have been made available and added to our online catalogue.

The Wartime Statistics Committee sounded dry, but like the FAU, its records include a fascinating resource for discovering individual histories – a sheet for every conscription age male Quaker or associate reported to the Committee by meetings around the country, with details of wartime service (peace witness, relief, religious or military). The returns have proved invaluable for researchers, including Cyril Pearce (author of Comrades in conscience) for his C.O. database soon to be made public by the Imperial War Museum.

We looked at contemporary publications too, with posts on peace pamphlets and wartime periodicals. After a personal highlight by our Visual Resources Development Officer focusing on the photograph album of Alan Burtt, a young FAU member just out of Sidcot School, putting his school-time enthusiasm for amateur photography to very different use in war ravaged northern France, we published a broad overview of World War I visual resources held by the Library – immensely important as a source of illustrative material for Friends marking the centenary and as a historical source in their own right. 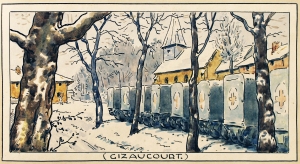 Looking ahead to 2015, expect the blog to return to a wider range of topics. We don’t predict a drop in World War I related enquiries or visits to the Library, but it’s clear that research in other areas continues to flourish. The blog will carry highlights, news and glimpses of work behind the scenes, as well as images to bring it all to life.

Lined up already are reports on our 15 month project to catalogue the large archive of the Friends Emergency & War Victims Relief Committee (an organisation which extended beyond the end of the First World War and into post-revolutionary Russia of the 1920s), highlights from the Hawkins Collection of early Quaker printed works (the latest stage in our retrospective cataloguing project), and a look at recent conservation work made possible by the BeFriend a Book fund.

We hope 2015 will be a peaceful and prosperous year for all and look forward to seeing you then – whether you are visiting the Library in person, contacting us from afar or visiting us online!