Have you ever kept a scrapbook, jotted things of interest in a notebook, or clipped extracts from webpages? Then you have been “commonplacing”. For centuries, writers, philosophers, theologians, scholars, poets, artists and others have gathered together passages from prose, quotations, proverbs, ideas and memoranda into commonplace books, often organised under headings for ready reference.

Why are these commonplace books so called? The idea of loci communes or “common places” where knowledge could be organised, dates back to classical antiquity. It owes a debt to Aristotelian topoi (topics), and to Cicero, who urged lawyers to collect information on general topics and principles to be recalled as needed.

In mediaeval times, students and scholars were encouraged to keep them as aides-memoires, storing information and organising it methodically for use in their studies. By the 17th century, commonplacing had become a recognised practice taught in universities,  a popular study technique persisting until the early 20th century.

The Library has in its collections commonplace books dating from the 17th to the 20th century. They are treasure troves of knowledge, preserving quotations, letters, prayers, anecdotes, verses, maxims and medicinal recipes. As personal selections, they reveal the interests, personalities and concerns of their compilers. They range in size from small notebooks to larger leather bound volumes, and in type (spiritual, theological, genealogical, artistic, literary, medical and more: often a combination of these). Unlike journals or notebooks, they anthologise the works of other authors, occasionally preserving the only copy of an original text. Matching transcriptions to their original source would be a research project in itself.

The four commonplace books of John Catchpool, Doncaster Quaker, and later baker and corn dealer of Winchmore Hill, London, are primarily theological and include transcriptions of the religious experiences and thoughts of early Friends. Volume one begins with a transcription of The Messiah by Alexander Pope (1688-1744),

“Ye Nymphs of Solyma, begin the Song, To heavenly Themes, sublimer Strains belong. The mossy fountains, and the sylvan Shades, The dreams of Pindus and the Aonian Maids, Delight no more…”

The volumes also contain carefully transcribed poems and visions, “A Poem on the Death of that faithfull and laborious Minister of the Gospel, Benjamin Kidd” and “The Prediction of Christopher Love, Minister at London, who was beheaded on Tower Hill in the Time of Oliver Cromwell, Government of England”; transcriptions of dreams and visions by Friends such as Samuel Fothergill and John Oxley, amongst others; and hymns and songs such as “A hymn composed by Catherine Evans when imprisoned at Malta in the year 1661” and “Religion the highest and happiest End of Man in a petitioning Song to the Divine Being”.

There are also a number of “Reflections” on society. “Reflections occasioned by being at Scarborough Spaw in the Summer of 1768 by Mary Miles” provides a rather vivid picture of Scarborough in the 18th century:

“Being at Scarborough my Mind was affected with various Reflections and Considerations from observing how many both of the Gentry and common people spent their Time in outward amusements, Plays, assemblies, Music and Dress…and divers of the lower Class pursuing Smuggling and other Wickedness, even to the committing two Murders while I was in that place…”

At the back of volume one, there are recipes for lotions and potions to relieve various illnesses, including “A Receipt against the Plague…” and “Receipt for the Tooth ach”. 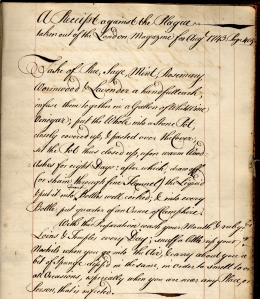 Sarah Robson was a founder of the Women’s First-Day School, Huddersfield, and the wife of Isaac Robson (1800-1885), a tea dealer of Liverpool. Her commonplace book is beautifully written. In it she records hymns and poems on the subject of death, including “The affusions of a mother’s [Ann Alexander] heart. Composed while sitting by the precious remains of a beloved child who departed this life at school at Broughton, Lincolnshire, the 18th of 9th month 1810 of typhus fever aged 9 years and 3 months”, and  accounts of religious visits to America:

“Lines composed by A. A., whilst on a religious engagement in America to her sister Mabel; written on a small piece of the bark of the birch tree with this direction: To be presented to Mabel Tuke on the day of her union with John Hipsley to bring into view her absent sister A.A. who had this bark taken from the white birch tree when walking on the banks of Kennebeck River, in the Eastern parts of New England 2nd 5th mo. 1804”.

There are interesting accounts of Friends, for example, “An account of some remarkable visions of John Adams of Yorkshire”. At the end of the volume someone else has written a version of the Golden Rule: “To do unto all men, as we would that they, in similar circumstances, should do unto us constitutes the great principle of virtue” and “The deceitfulness of riches or the cares of this life have choked the seeds of virtue in many a promising youth”. 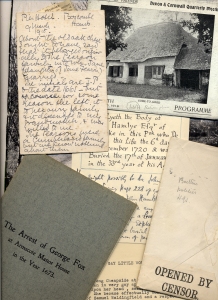 “I should like this book to be offered to the Friends’ Reference Library, after my death, in case they may care to have it. L. Violet Holdsworth September 1925”

It contains transcriptions of early manuscripts, epistles, testimonies and private letters (many held by the Library), which she had made for The Romance of the inward light (1932).

The pages are interspersed with news cuttings and leaflets concerning Quaker meeting houses, letters, articles for The Friend and Quakeriana, and a booklet entitled, “The Arrest of George Fox at Armscote Manor House in the Year 1673”. She made pencil sketches of Derwentwater (September 1931), Wayside Cottage, Cheshire (August 1930), Pendle Hill (6 September 1930), “Fox’s Pulpit”, Sedbergh (8 August 1930) and “St John’s from London”.

Commonplacing is like making a collection of precious gems, or gathering flowers for a garland – a very personal selection of inspiring and fruitful resources. What kind of things would you include in your commonplace book?

Like Loading...
This entry was posted in Highlights and tagged archives, commonplace books, personal papers. Bookmark the permalink.