The Ploughshare, voice of Quaker Socialism 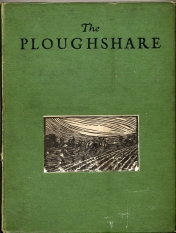 Bound volume II of The Ploughshare (1917)

The Ploughshare was a quarterly, later monthly, journal published by the Socialist Quaker Society (SQS) between 1912 and 1919. It was edited by William Loftus Hare (1868–1943) and Hubert W. Peet, (1886–1951), who was so committed to the journal and its cause that he continued to be involved in its production even when he was imprisoned as a conscientious objector during the First World War from 1916 to 1919.

Signature of Hubert W. Peet from The Ploughshare, volume II (1916)

In the later 19th and early 20th century, Friends became ever more concerned with issues of social inequality and militarism. It was against this background that the Socialist Quaker Society (SQS) was founded on 2 April 1898 when Mary O’Brien, James Theodore Harris, Thomas Dent (1867–1943), H. G. Dalton and five other Friends met at 27 Yonge Park, London.  The SQS aimed to educate Friends about socialism and promote it as a solution to the problems of the day.

The Ploughshare, as well as being the official journal of the SQS, played an important role as a platform for anti-war sentiments during the First World War. Floyd Dell (1887–1969), editor of the New York Marxist paper Masses, wrote to The Ploughshare describing it as “a beautifully printed, admirably written [and] very impressive paper” (Three Letters. The Ploughshare, volume I, number 6 (1916) p. 196).

‘At the Sign of the Plough : where current matters are discussed’ section title, The Ploughshare, volume II, number 8 (September 1917), p. 251

The history of The Ploughshare can be divided into three distinct periods. Issues 1 to 12 (1912–1915) were published quarterly with the subtitle, “Organ of the Quaker Socialist Society”. From 1916 it started a new series, published monthly in a larger format, with the subtitle, “A Quaker Organ of Social Reconstruction”. Finally, after the SQS ended its association with The Ploughshare in 1919, it would continue for one more volume as an independent publication (this volume is not held at the Library). 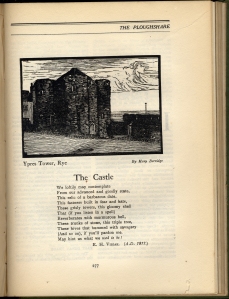 The journal also included poetry, book reviews, news of other “progressive movements” and lively correspondence under the heading “Let Us Reason Together”. It regularly ran essays on mysticism and religious thought, and Quaker pacifist principles. This perhaps placed it in a unique position among anti–war publications.

The series, “The lonely furrow and some who have ploughed” not only includes biographical overviews of prominent Friends such as George Fox (1624–1691), William Penn (1644–1718) and John Woolman (1720–1772), but also  thinkers such as Socrates, Confucius and Erasmus, recent pacifists such as Francis Sheehy Skeffington (1878–1916) and Clifford Allen (1889–1939), and historical figures such as John Ball, the 14th century Lollard priest, and Gerrard Winstanley, Digger (1609–1676). These articles included beautiful illustrations by the likes of Joseph Southall (1861–1944). The journal frequently carried both commissioned and reproduced artwork (particularly woodcuts) from 1916 onwards. 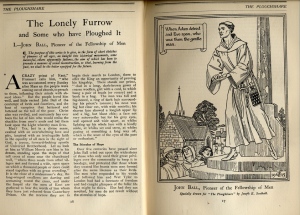 The Ploughshare had several women on its advisory council and regularly ran articles on women’s rights (using the term “feminism” in the title of articles on at least two occasions) and had a large number of female contributors. Dorothy M. Richardson, The Reality of Feminism (The Ploughshare, volume II, number 8 (September 1917), pp. 241-246) and Emily Hobhouse, Comforting the Enemy and Coals of Fire (The Ploughshare, volume I, number 11 (December 1916), pp. 339-341) being just two examples.

The paper addressed issues of the day, such as Irish nationalism. It was sympathetic to the subject of Indian home rule and generally took an internationalist stance. An article from October 1919 took a critical line on the behaviour of Britain and other “great powers” in Iran.

The Ploughshare is a fascinating periodical for those interested in early 20th century Quakerism, Christian socialism and the development of the British socialist and anti-war movements in general.

Like Loading...
This entry was posted in Highlights and tagged periodicals, Ploughshare, printed works, Socialist Quaker Society. Bookmark the permalink.

5 Responses to The Ploughshare, voice of Quaker Socialism