As part of the ongoing work to improve access to the Library’s printed books and pamphlets we have now added the Richardson Collection to our online catalogue. Unlike the other early books catalogued as part of the project, these books were not included on our old card catalogue, so they were in effect hidden. From their well-thumbed appearance though, they had heavy use in the days of their former owner, Richard Richardson (1623?-1689), the Quakers’ second Recording Clerk.

Richard Richardson had a background in teaching. As a schoolmaster he was tried at Chelmsford and imprisoned from 1670-1672 for teaching without licence and refusing to take the oath of allegiance. In 1674 he was appointed as master of a school for the children of poor Friends at Devonshire House, Bishopsgate. He assumed the role of Recording Clerk of the Society of Friends in 1681. His learning was valued by Friends: George Fox consulted him in 1679 in preparation for his tract on marriage True marriage declared or Severall testimonyes from the reccord of Scriptvre concerning the true marriages and such as are not according to the truth. Among other duties, he was responsible for procuring two copies of every book written by Friends and one copy of every book written against them, as minuted by the Second Day’s Morning Meeting in 1673 – the foundation of this Library’s remarkable and comprehensive collection of Quaker publications.

The books in the Richardson Collection, however, were not Quaker writings, but part of the working library of an early Quaker Recording Clerk. As cataloguing progressed, a picture emerged of the importance for early Friends of this small scholarly collection of Old and New Testament editions, church history, post-Reformation theology, civil and ecclesiastical law, and dictionaries.

We found that while a dozen of the books (published between 1538 and 1679) were printed in London, the remaining 16 were published on the continent at Paris, Louvain, Lyons, Basle, Geneva, Zurich, Frankfurt, Nuremberg, Amsterdam and Rome. They indicate a breadth of study, and the range of resources that Friends needed in order to defend their beliefs and practice against the attacks of their opponents, during an era of fierce theological controversy. Richardson was certainly well educated, reading Latin, Greek, Hebrew, French, German and Dutch, and even Arabic and Ethiopic.

Cataloguing the collection revealed some puzzles about Richardson’s original library. Though he left his books to Friends, we do not know the full extent of his original library. And one book at least could not have come from Richardson (Sir Walter Rawleigh’s ghost (1652), inscribed by a later owner in 1702). 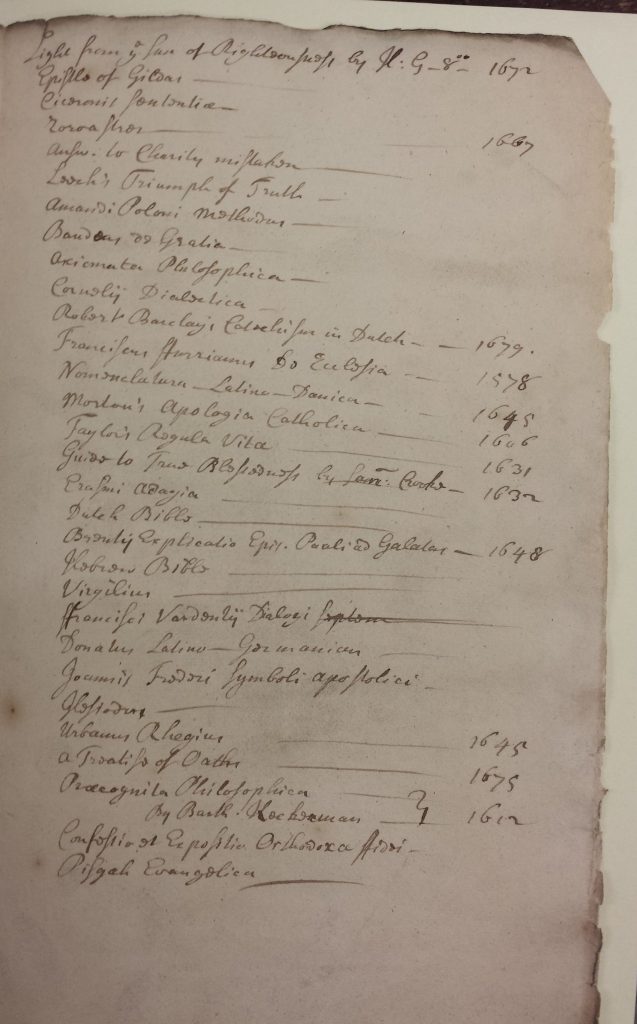 Three of the Catalogus books are held elsewhere in our collections (including the Treatise on oaths, (1675), co-authored by Richardson with William Penn and others), but a close examination of those copies uncovered no conclusive evidence of Richardson’s ownership. Titles from the Catalogus not held here include works by classical Latin writers, and continental reformers such as Erasmus (1466?-1536), Johannes Brenz (1499-1570), Urbanus Rhegius (1489-1541), Heinrich Bullinger (1504-1575) and Bartholomäus Keckermann  promoter of the colony of Virginia.

Between the leaves of one of the surviving Richardson books we came across a manuscript headed “14.6mo.88. A note of ye books sent by G. Watt”. George Watt died in the following month: George Fox wrote a testimony, or spiritual obituary, for him (A testimony concerning our dear Friend and brother George Watt, London, the 6th of the 9th moneth, 1688). This manuscript listed three book titles, one of which was the volume in which the manuscript was found (the writings of Flemish monk and mystic Louis de Blois – D. Ludovici Blosii abbatis Lætiensis nostri secvli laudatissimi Opera (1622), Richardson Collection no. 18). George Watt’s name is inscribed on its title page. The other two, by John Selden, were no longer with the Richardson Collection. To our delight we identified one of them – Selden’s De synedriis & præfecturis juridicis veterum Ebræorum libri tres (Amsterdam, 1679) – as a copy held in the Library’s general collection. It was clearly inscribed with the name of the earlier owner, George Watt, but not identified as part of the Richardson Collection. 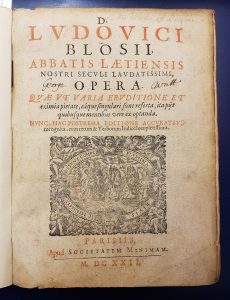 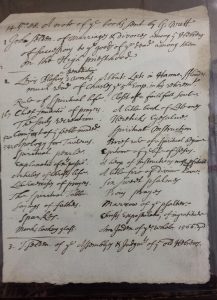 All these books are now on our online catalogue, and we have reported the details of holdings to major bibliographic databases such as English Short-Title Catalogue, Short-Title Catalogue Netherlands, and the Verzeichnis der Drucke des 16. Jahrhunderts. Once again they are available for use, and their existence widely recorded.

We are grateful for the help given by Peter Salinger of University College London in identifying and cataloguing the collection’s two Hebrew Torahs, printed in Geneva in 1617-1618 and Amsterdam in 1630.

We welcome enquiries about the books in the Richardson Collection. For further information, or a list of the books catalogued, please contact us. 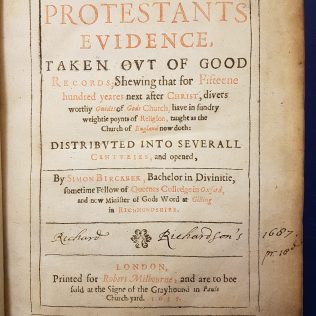 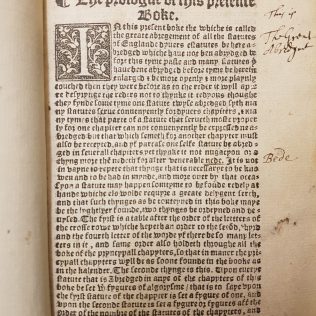 Richardson Collection 3. The great abredgement of all the statutes of Englande (1542) 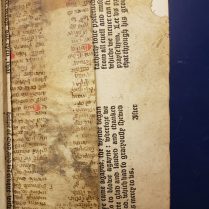 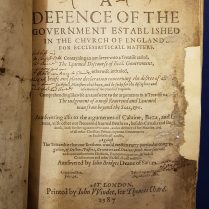 Richardson Collection 4. Bridges, John, A defence of the gouernment established in the Church of Englande for ecclesiasticall matters (1587) 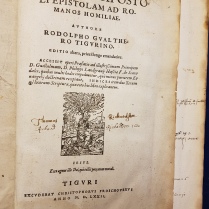 Dictionary of Quaker biography (unpublished typescript, Library of the Society of Friends, London)