The Hawkins Collection: an early Quaker library, its provenance and some puzzles

We’ve recently finished cataloguing the contents of the Hawkins Collection – a remarkable private library bequeathed by Richard Hawkins (1649?-1735) to Westminster Monthly Meeting. The collection consists of 86 bound volumes containing over 1,200 individual publications – books, pamphlets and folded broadsides – spanning a century from 1612 to 1713. Its ownership was eventually transferred to this Library in 2005, after it had already been on deposit here for many years, arriving in two batches in 1906 and 1933. Every item in the collection has now, for the first time, been fully catalogued as part of the Library’s Retrospective Cataloguing Project and is searchable on our online catalogue.

Apart from the wealth of its contents, one of the most remarkable features of the Hawkins Collection is its fascinating and complicated provenance. Given in stages by Richard Hawkins for the use of Friends at Hammersmith and at the Savoy Meeting , and in a final bequest to Westminster Quakers at his death, it includes some well used books, such as this legal textbook mentioned specifically in Hawkins’ will, the oldest title in the collection, published in 1612:

Pulton, Ferdinando. A kalender, or table, comprehending the effect of all the statutes that haue beene made and put in print, beginning with Magna Charta (1612)
(Library reference: Hawkins Vol. 82)

The collection as a whole is of particular interest for the study of early Quakerism, because it includes many items from the personal library of George Fox, one of the founders of the Quaker movement. After his death in 1690/1, Fox’s books had been moved to the home of his son-in-law and literary executor, William Mead (ca. 1627-1713. From Mead’s house, many of the volumes went subsequently to Thomas Lower (1633-1720) of Hammersmith, another son-in-law. Richard Hawkins was in turn Lower’s executor. Some of these books Hawkins passed to Hammersmith Meeting (which became part of Westminster Monthly Meeting in 1750), others to the Savoy Meeting. So among the collection Hawkins left to Westminster Quakers there were eventually at least 24 volumes (books, bound pamphlets and broadsides) identified as having once belonged to George Fox.

You can read more about the complex and detailed work done to identify the books from Fox’s library, in this collection and elsewhere, in a series of articles published in the Journal of the Friends Historical Society[1] in the 1930s. Henry J. Cadbury noted a range of identifying marks in 20 of the 60 Hawkins volumes already in Friends House by that time, including fore edge numbering matching the numbers given in the  the Annual catalogue of the papers of George Fox, “G.F.” ownership stamp on front and back boards of volumes 27 and 53, inscription “G F s Book” on flyleaf in 13 of the books examined (matching the hands of similar inscriptions in other volumes previously identified as from Fox’s collection), the familiar “gf” on the title pages of certain anonymous pamphlets, probably in Fox’s own hand, indicating his own authorship. A further four volumes (67, 84, 85, 86) were subsequently identified among the remaining Hawkins books that came to Friends House in 1933. 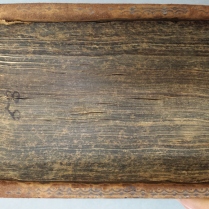 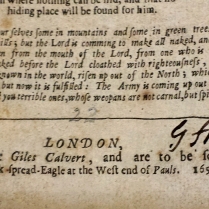 MS inscription “GF” indicating Fox’s own authorship of anonymous pamphlets in his collection. Title page of Newes coming up out of the north, sounding towards the south (Hawkins Vol. 22/1)

MS inscription to Hammersmith Meeting by Richard Hawkins, one of the executors of Thomas Lower, 1725 (Hawkins Vol. 22)

There’s considerable scope for further research to establish the full picture of the collection’s history and use. How, for example, did Hawkins volume 41 (volume 33 from Fox’s library) come to be given to Westminster Friends by the bibliographer John Whiting (inscribed “John Whiting His Gift To the Savoy Meeting 4th 11th Month 1715 Numb 4”)? Could any of the other volumes, many of which have been rebound and cropped, thus losing any fore edge numbering, be identified as from Fox’s library? When and how did volumes at Savoy and Hammersmith come together at Westminster Meeting? When was the collection re-numbered in its present form, and some volumes, but not all, re-bound? And who were the rascals who used the margins and blank end pages of some of the pamphlets for handwriting practice? 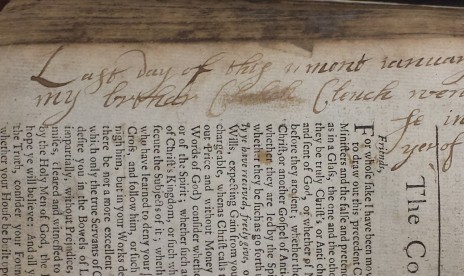 Marginal writing in Nicholas Knight, A comparison between the true and false ministers (1675) (Library reference: Hawkins Vol. 20/21a)

Marginal handwriting practice on final page of John Stubbs, For the king and both houses of Parliament (1670) (Library reference Hawkins Vol. 20/12)

One mystery we were able to solve – though it raised a few more questions! Although every other item in the collection was published before 1714, volume 14 contained one pamphlet printed in 1777, over forty years after Richard Hawkins’s death (Some expressions of Ann Lever daughter of Iohn and Mary Lever [i.e. Leaver], of Nottingham, during her last illness – unique to this Library).

The answer lay in a handwritten note by the Quaker bibliographer Morris Birkbeck (1734-1816), whose spidery pencil annotations are unmistakably in evidence in so many Quaker collections. It seems that Birkbeck had spotted a volume he wanted in the Hawkins Collection and swapped it for one of his own (by agreement one hopes). His note punctiliously records the exchange in what sound like advantageous terms: “for Westminster book case. 25 Pamphlets containing 82 Sheets; in return for 18 ditto containing 80 sheets, had by M. Birkbeck, towards his Collection”. But it doesn’t say “Oh, and by the way, I threw in some death-bed sayings of Ann Leaver, recently published”, or, more importantly, what he got in return.

Note by Morris Birkbeck at the front of Hawkins Vol. 14

A further mystery we cannot solve, and throw out to you our readers, in the hope that one of you may be able to shed some light. As a result of the project, we reported three completely new works from the Hawkins Collection to the English Short Title Catalogue, (ESTC), among them a broadside appeal to the King and Counsel against persecution of Quakers, probably published around 1664, in Hawkins volume 32 (formerly number 14 in Fox’s library). 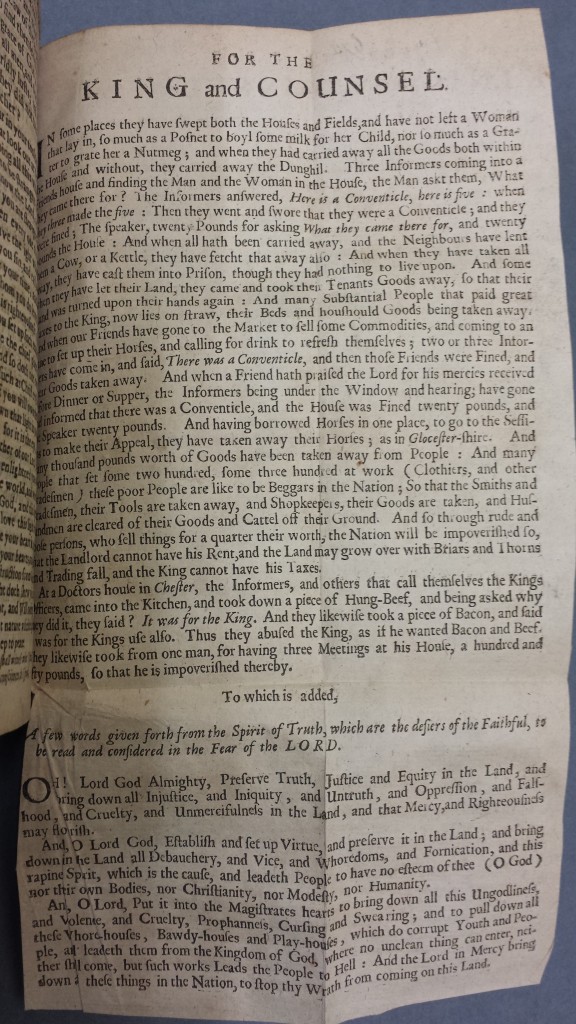 For the King and counsel. In some places they have swept both the houses and fields, and have not left a woman who lay in, so much as a posnet to boyl some milk for her child [London?, 1664?].
(Library reference: Hawkins vol. 32/49)
A posnet is a small metal pot with a handle and three feet used for boiling milk etc. (in case you were wondering…)

Not only is this anonymous work new to ESTC, neither does it appear in Wing’s Short-title catalogue…1641-1700, nor in the printed catalogues of John Whiting or Joseph Smith. Who was the author? All but 11 of the 63 items in the same volume are by George Fox. Could this previously uncatalogued broadside be another of Fox’s works, never previously recorded? All suggestions gratefully received!

2 Responses to The Hawkins Collection: an early Quaker library, its provenance and some puzzles