Work to add all the Library’s printed materials to our online catalogue continues, reaching into some less visited corners of the collections. In the angle of the reading room gallery sits a collection of Quaker texts translated into foreign languages for use in the mission field. Among them are various volumes of early 20th century Chinese books and pamphlets translated by one Isaac Mason (1870-1939).

Early Quaker works had been translated into Latin, Dutch, French, Hebrew, Polish and even Arabic, for diffusion throughout Europe and the near East. In the 19th century many works began to be translated into Scandinavian languages, and the Society of Friends’ annual epistle appeared in German translated by the Recording Clerk himself. Isaac Mason was responsible for the earliest  transmission of Quaker writings to a Chinese audience: his career as a missionary and translator is a fascinating one.

Isaac Mason in Sichuan. From: Davidson, Robert J. and Mason, Isaac, Life in West China: described by two residents in the province of Sz-chwan (1905) p. 211

Isaac was born in Holbeck, Leeds, in January 1870 and joined Quakers through his connection with the Great Wilson Street Sunday School and Adult School. He proved “headstrong and difficult”, a thorn in the side of the staff, but, on the point of being expelled, he came under the influence of Caroline Southall in the Adult School and became intensely loyal to her. She and other Leeds Quakers offered their service with the Friends Foreign Missionary Association (FFMA) in China. Mason volunteered too, but was only accepted a year later.

After a further year of working as an iron moulder in Leeds and studying in his free time, he moved to London, where he started work at the Barnet Grove branch of the Bedford Institute, became engaged to Esther L. Beckwith, and finally went out to join the FFMA in Chungking (Chongqing) in 1894. He and Esther settled in T’ung Ch’wan, Szechwan Province (Tongchuan District, Sichuan) and did pioneer work at She Hong and Suining. Together they passed safely through some turbulent times – local riots,  the anti-missionary Boxer Uprising and the Revolution of 1911 (Xinhai Revolution). 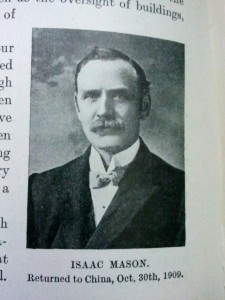 Isaac Mason or Mei I-seng as he was known in China, mastered the language with unusual quickness. After 22 years in West China, he moved to Shanghai, where his interest in the production of Friends’ literature in Chinese flourished. He translated for the Christian Literature Society of China short lives of Quakers such as William Penn, John Bright, John Howard, Stephen Grellet and parts of John Woolman’s Journal. He also tackled Sir George Newman’s Health of the state, dozens of religious books and pamphlets and helped compile a Chinese dictionary of the Bible. Many of his pamphlets reflect his interest in Islam in China. Among the children’s books are The Swiss family Robinson, and Lamb’s Tales from Shakespeare.

Like some other contemporary Christian missionaries Isaac Mason had a particular interest in Chinese Muslims, and he was elected as a Fellow of the Royal Geographical Society in 1921. His election proposal stated that “Mr Mason has spent many years in China, travelled in the interior, investigated Chinese Mahommedanism, is the Secretary of the China Branch of the Royal Asiatic Society, and is in every way eligible for election as a Fellow. He is the author of several books in Chinese and English” (proposed by Zwemer and seconded by Heawood, the RGS Librarian; thanks to the Royal Geographical Society Library for this information).

One of the bonuses of this Library’s retrospective cataloguing project has been the opportunity to provide better catalogue entries for foreign language publications – often poorly identified in the former card catalogue, or simply not catalogued at all.  In adding this small collection of Chinese tracts to our online catalogue we faced considerable linguistic challenges. We did have help though – sometimes the original English titles were printed in English on the reverse of the title page, and occasional manuscript notes on the items themselves were invaluable. A few had explanatory notes from Isaac Mason himself. 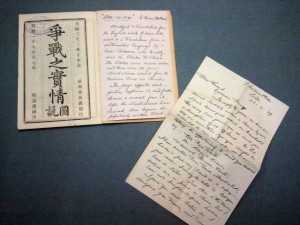 The Library’s copy of War as it is, translated by Isaac Mason, with note by translator and accompanying letter to the Librarian, Norman Penney 23/3/1909

Though cheaply produced, the books and pamphlets are delightfully different from their English equivalents. In many of them, each “leaf” is in fact a single sheet printed on one side only (as was traditional in Chinese book production), to make two “pages” of text with bold black borders, then folded in half to make a double sided page.

More on Isaac Mason and Quaker missionaries in China

Friends in China (Library of the Society of Friends online exhibition, 2008)

Tyzack, Charles Friends to China: the Davidson brothers and the Friends’ mission to China 1886-1939. York: Sessions, 1988