Readers of early Quaker literature cannot fail to be aware of the history of religious persecution of the Quakers in the seventeenth century. Although the Act of Toleration of 1689 marked the end of its most extreme forms, Quakers continued to be subject to confiscation of goods, fines and imprisonment for refusing to pay church tithes or take oaths, and to be excluded from public office. Friends assiduously recorded these “sufferings” at a local and national level from early on. These accounts were both a record of conformity to Quaker public testimonies, and grist to the mill of an energetic campaign for legislative change. The Library holds a profusion of published and unpublished sources on Quaker sufferings, described by one historian as an “embarras de richesse”: this post is an outline of some of the most important.

The Great Books of Sufferings are a series of 44 “elephant folio” sized manuscript volumes ranged along six metres of sturdy metal shelving in the Library strongrooms. Many volumes in the series were rebound in handsome blue leather in the twentieth century, but others retain their earlier bindings – the first two (currently available only on microfilm, for conservation reasons) furnished with massive leather spine straps for hauling off the shelves. 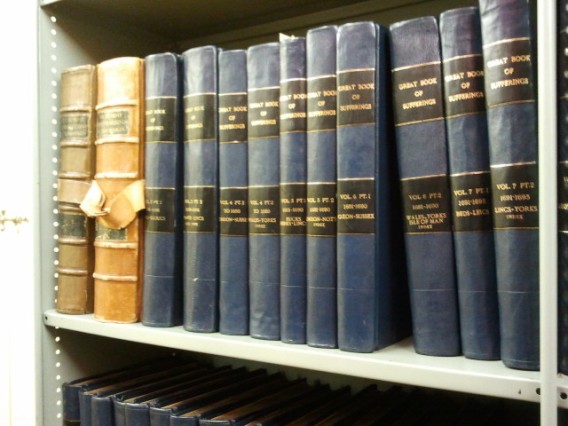 The Great Books of Sufferings

These meticulous records of prosecutions of Quakers in civil, criminal and church courts from the 1650s up to the mid 19th century, along with accounts of unjust treatment at the hands of persecutors, were compiled by the Society of Friends’ Recording Clerk in London from letters and reports sent in by each quarterly meeting around the country. 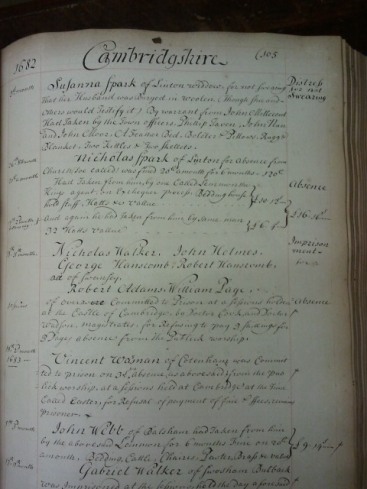 They provide detailed contemporary accounts of imprisonments, distraints (seizure of property to discharge fines) and other penalties levied on Quakers for crimes such as non-attendance at church, illegal meetings, refusal to take oaths or pay tithes. Often individual persecutors (magistrates, parsons, bailiffs and others involved) are named. Organised chronologically by county, the records are a remarkable source for social and economic historians and those researching local and family history, as well as historians of Quakerism.

Indexes of people (both Quakers and their persecutors) and of places were made when the books were compiled, and are bound in with the text: these are now being supplemented by modern indexes and contents lists compiled by our Library volunteers.

Less well known than the Great Books of Sufferings is a series of volumes in the Yearly Meeting archives known as the Original Records of Sufferings, consisting of original accounts of sufferings sent up to London by individuals or meetings during the period 1655–1766. A listing of the contents of these eight volumes is available, compiled by Craig W. Horle, a former member of staff.

Monthly meetings around the country were exhorted to submit accounts of religious persecution to be recorded by Friends in London. Often, but not invariably, these were also written into local “books of sufferings”. These volumes remain with local Quaker records, mainly now deposited in county record offices. There are many examples of these volumes among the extensive records of London & Middlesex monthly meetings (which we hold here in the Library), as you’ll see from this list showing the individual monthly meetings and the years covered:

Quaker sufferings also appeared in print early on. Searching our online catalogue by subject “religious persecution” yields a large number of book and pamphlet records which can be sorted by date, including vigorous attacks on those responsible for rude treatment of Quakers, accounts of persecution, refutations and appeals to authority. Here are title pages of a few of the publications: 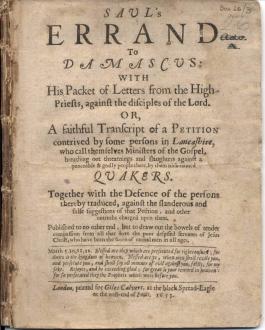 Richard Hubberthorne. A true testimony of the zeal of Oxford-professors and university-men who for zeal persecute the servants of the living God, following the example of their brethren of Cambridge (London: printed for Giles Calvert, at the Black Spread-Eagle neer the west-end of Pauls, 1654). – [2], 14 p. ; (4to) 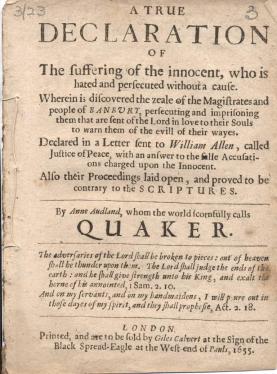 Anne Audland. A true declaration of the suffering of the innocent, who is hated and persecuted without a cause. Wherein is discovered the zeale of the magistrates and people of Banbury [etc.] (London : printed, and are to be sold by Giles Calvert at the sign of the Black Spread-Eagle at the west-end of Pauls, 1655). – [2], 6 p. ; (4to)

Stephen Smith. A trumpet sounded in the ears of persecutors; with lowing of oxen, and cows; bleating of sheep; neighing of horses; ratlings of pots, kettles, skillets, dishes, and pans. Taken from an innocent people, for confessing Christ Jesus, Gods everlasting way out of evil; and for their meeting together in his name, where Gods presence is felt, to support, and carry above the fear of man [etc.] ([London? : s.n.], Printed in the year, 1670). – 7, [1] p. ; (4to)

Although the volume of published pamphlets on the subject of sufferings decreased and their tone became less strident over the years, Quakers continued to use the medium of print to condemn persecution and argue the case against injustice.

Joseph Besse (1683?-1757) was one of the many eighteenth century Friends who publicised the Quaker case against tithes. His writings from the 1730s to the 1750s directed these arguments to Parliament, and against the ecclesiastical powers,  culminating in a long laboured over two volume historical account of the earlier times: A collection of the sufferings of the people called Quakers (London: Luke Hinde, 1753). Besse’s compendious work drew on the Great Books of Sufferings and accounts submitted by meetings, supplemented by additional sources, to remind his audience of the thousands of Quakers jailed, and the 400 or more who died, as a result of their persecution before the passing of the Act of Toleration in 1689. It is also a valued source for local and family historians. Modern facsimiles have been published in parts, with new indexes, by Sessions Book Trust (now out of print, but many of the parts are still available from the Quaker Bookshop).

Joseph Besse. A collection of the sufferings of the people called Quakers (London, 1753). Title page of volume I

Richard Vann gives a good account of the long pre-publication history of Besse’s Sufferings and its complicated relationship with the Great Books of Sufferings , the Original Records of Sufferings, quarterly meeting records and other sources in “Friends sufferings – collected and recollected” (Quaker history, vol.61/1 (Spring 1972), p. 24-35). For a literary analysis, see John Knott’s chapter “Joseph Besse and the Quaker culture of suffering” in Thomas N. Corns and David Loewenstein, The emergence of Quaker writing: dissenting literature in seventeenth-century England (1995).

The word “sufferings” continues in use in the name of Meeting for Sufferings, the standing representative committee of the Society of Friends in Britain, originally set up in 1675 to seek redress for Friends in cases of religious persecution and to lobby for religious toleration, particularly through legislation. The idea of suffering for religious principles finds resonance still, most notably in the twentieth century experiences of Quakers who have maintained their testimony against war and militarism.

Like Loading...
This entry was posted in Highlights and tagged archives, Quaker sufferings, rare books. Bookmark the permalink.