The last weekend in May will see a transformation of Friends House, as Quakers from all over the country arrive for the annual assembly known as Yearly Meeting. Friends have gathered together yearly from 1688 onwards, and the records of those meetings are here in the Library.

The minutes and epistles of London Yearly Meeting (as it was known until 1995 when the name changed to Britain Yearly Meeting) provided the material for the earliest “books of discipline” – forerunners of the modern Quaker faith and practice. They are the official records of the Meeting, which oversees the work and concerns of the Society of Friends, educates, inspires and fosters the community of Quakers in Britain.

But what of the individual Friends who have attended Yearly Meeting over the years? As a spiritual highlight and a social gathering (and, for country Friends, the attraction of an annual visit to London), the Yearly Meeting was an important event, to be noted in diaries, letters and memoranda. The Library has a wealth of these personal accounts of Yearly Meeting, few of them published.

John Kelsall (1683–1743), schoolteacher and sometime manager of one of the Darby families’ iron foundries, an active Friend in Wales and England, was one of the earlier private diarists of the Yearly Meeting. Among his papers in the Library is a daily account of the Yearly Meeting for 1704: “a journal of the s[ai]d Yearly Meeting as I then writ it day to day”. It occupies ten pages of a small notebook, including passages in Latin (MS VOL S 193/4, p. 29ff). 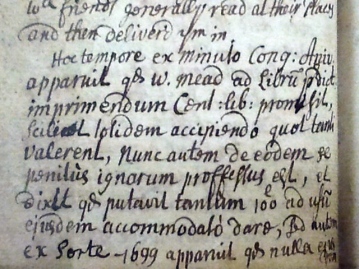 A passage in Latin in John Kelsall’s account of Yearly Meeting 1704, describing the “warm debate” over the editing and publication of George Fox’s Doctrinals (Lib. Ref. MS VOL S 193/4)

Several generations later, James Jenkins (1753-1831) attended many Yearly Meetings. His diaries are a plain speaking font of information on hundreds of contemporary Quakers and non-Quakers. Here he makes some characteristically frank and penetrating comments on the abilities of one recently deceased Yearly Meeting clerk, not known for the “brightness of his intellectual endowments”:

I have heard it asked – how did a man so moderately gifted, get through that office: – the answer (I think) was, pretty well; for on his right hand he had Jer[emia]h Waring, and on his left another Friend conversant with the routine of Yearly Meeting business. – they instructed him in the order of procedure, & assisted him in making the needful minutes. (MS VOL S 195, p. 756, also published in his Records and Recollections of James Jenkins, ed. Jerry W. Frost, 1984, pp. 483–484)

For every acute observation such as this, there are quieter passages in diaries and memoirs, recording the spiritual experience of attending a large national gathering. Susanna Boone (1731–1789), in her unpublished Memoirs of the life… written by herself, states, for 14 May 1775:

The first day of the yearly meeting which was larger than the year before & the Lord was pleased to qualify his servants to hand forth good advice and counsel, O saith my soul that it was but more minded! I there met with some good friends of my acquaintance … it is exceedingly comfortable to be near to them that are good, O that I and very many more may come to be of that happy number… (MS BOX E 3/7, p. 100: this passage may refer to attendance at the Circular Yearly Meeting for the Western counties).

The experience was not always so uplifting, however:

After dinner we attended our Women’s Meeting at four o’clock which lasted until nearly eight o’clock; it was to me very long and tedious; indeed it may be and I doubt not is in great part my own weakness, but to hold fast my faith I found in this Yearly Meeting no instrument ought to be looked to. (MS VOL S 260, part 1, oversize pages, Elizabeth Fry diary entry for May 29 1801)

Some personal accounts ponder matters raised at Yearly Meeting. Margaret Woods (1748–1821) considers the effects on Friends of their social relations with the “world’s people” in her diary entry for 28 May 1812:

We had some remarks, this Yearly Meeting, on the danger of associating much with those not of our Society, not from attributing particular holiness to ourselves, but as it leads to an assimilation with the customs, manners and spirit of the world, which the principles of our Society testify against. Observation must convince us, that it rarely happens that those of our Society who mingle much with others, retain that simplicity of dress and behaviour… (MS BOX O3/7, pp. 176ff, later published in Extracts from the journal &c of the late Margaret Woods, 1829, p. 386)

Other references to Yearly Meeting business are simply passing diary entries, brief, scribbled notes that confirm what we might have expected. Bevan Lean (1865–1947), lifelong teacher and for many years headmaster of Sidcot School, attended Yearly Meeting in 1902, noting: “Discussion on Education Bill … I lead the opposition to the report of the Meeting of Sufferings [sic]”. In fact a report was sent by the Yearly Meeting to the government, but many Friends, like other nonconformists, did oppose the 1902 Education Act before and after it was passed (Bevan Lean, Diaries, MS VOL S 374, 27 May 1902. See also Meeting for Sufferings minutes YM/MfS/M53, and Yearly Meeting, 1907, minute 50).

The Library holds so many other journals and private documents on past Yearly Meetings it would be impossible to summarise or list all of them here. Many prominent 18th and 19th century Friends would be on that list though, as you will see from the list at the end of this post.

So if you’re one of the Quakers attending Yearly Meeting in 2012, what sort of record will you leave behind you? Will it be a spiritual diary, email, letter or blogpost? Perhaps your experiences too will be the subject of historical study in years to come. 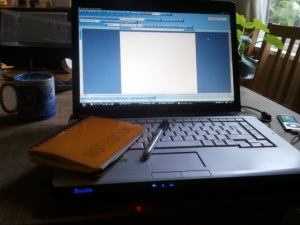 Like Loading...
This entry was posted in Highlights and tagged archives, manuscripts, personal papers, Yearly Meeting. Bookmark the permalink.